Moving a Severe ME patient

I was at the recent FDA meeting. Whether it is this meeting or any other government meetings, no mention is ever made of severely ill ME/CFS patients. No depiction of the real severity of the illness is recorded or given. There seems to be a constitutional allergy to depicting "the core of this illness".

This is true of government bureaucrats as well as patients, advocates, physicians, and clinicians – everyone. Many "half-sick", ambulatory patients give eloquent and heartfelt testimonies at government grieving altars. Regardless of the sacrifice on the part of patients, this information does not seem to impress anyone. Nothing happens.  This is a longstanding reality.

It is a structural problem – not embracing the deep seriousness of the illness. No one wants to go there.

ME is a dangerous, debilitating, life-destroying illness of a frightening dimension. The government’s half-baked response to this illness shows great disregard - and manifests incredible cruelty towards patients with this serious illness.

Until those at the center of this illness - those in darkened rooms - are depicted and embraced and understood, nothing will happen at the government level.

In order to set the tone, videos of severely ill patients should be presented at the beginning of any government or private conference on ME/CFS. Voices from the Shadows, Josh Biggs' and Natalie Boulton's very fine film (or similar videos ), should be mandatory - to set the stage and to get the participants in the right frame of mind.

There is clear evidence that the government has no interest in this. Multiple times they have been given the opportunity to present visual evidence of the severity of the illness, and they have said – no.  The government is content to give a grieving altar to the moderately ill and leave it at that.

The very, very ill have big problems. Everything around them represents a threat to their health. They need to be protected at every level – protected from doctors, from realtors, from neighbors, from movement, from noise and vibration, from friends, from family, from hospitals, from water, air, chemicals, mold – from everything.


My daughter recently wrote about her May 2012 move from one apartment to another. She writes her blog posts excruciatingly slowly - mostly from memory, using a voice recorder, and typing on a keyboard without using her eyes.  Among other things, my daughter suffers from photophobia and hyperacusis.

In April 2010, in a similar coordinated operation, we took her to a neuro-ophthalmologist.  I was concerned about her eyes. (I still am.) My eldest son flew in from Baltimore and, along with a MN friend, we drove my daughter the 12 minutes to the doctor's office. My daughter lay in the back seat of a Chevy sedan. As I was helping my daughter out of the car she said that she felt “like she had been beat up”.  (I learned something there.) We rolled her into the office on a wheel chair. The office staff was compliant. They lowered the shades and turned off the lights. The neuro-ophthalmologist did the first half of an eye exam and found nothing remarkable.  When the doctor left the very small office for a few minutes, my daughter got out of the examination chair and lay on the floor on a mat that we had brought with us. This seemed to disarm the doctor. A few minutes later we were back in the car, heading home. Once back in her apartment, my daughter recovered slowly - taking nine weeks to reach baseline. Moving an ME/CFS patient is a precarious business.

While this trip was difficult, and costly in terms of recovery, my feeling was that at least we had gained one doctor in MN. This turned out to be a delusion - as this physician proved unwilling to deal with my daughter through an advocate. Pleas to do so from another more compliant physician fell on deaf ears.

Recently I have learned from an ME/CFS friend a little more about moving severe ME patients. Here is my friend’s explanation:

“A car trip with CFIDS can be exhausting and unsafe, yet necessary to get to medical appointments. Lying across the back seat with no seat belts is highly uncomfortable and unsafe and the average backseat is rarely flat and small cars aren’t wide enough for a horizontal adult. Although a front passenger seat can be tilted back, it does not go completely horizontal and often is uncomfortable as well and the seatbelt can actually be dangerous to use with the passenger seat tilted down.

After many months of research I decided to put an ambulance cot with seat belts in my van. I worked with an ambulance outfitter and we removed one of the back seats in my Honda Odyssey and then bolted the ambulance cot through the floor. This van-with-cot and harness seat-belt innovation has greatly improved my ability to get to medical appointments even if they are far away and even, though rarer, to occasionally make a nonmedical trip. It has made car travel possible in two very different, but equally critical ways:

1) It allows for long trips in both comfort and safety and one can also switch to the front passenger seat to be upright for a while.

2) It also allows a CFS patient who can drive a few miles to have the ability to rest at any point during the trip as you can pull over and get in back and rest as long as needed before continuing the trip or errand.
I was able to sell my old car for the same price I bought a 1996 second hand Honda Odyssey and I was lucky to get a free ambulance cot that had been removed in an upgrade. My only cost was the $200 installation. The cot is outfitted with pillows and a lightweight blanket and sleeping bag. A stick-on-protection film on the window reduces the sunlight. The original ambulance mattress was pretty hard so it's helpful to add a medium density latex 2” topper which can be cut to size.” 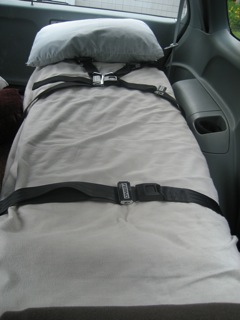 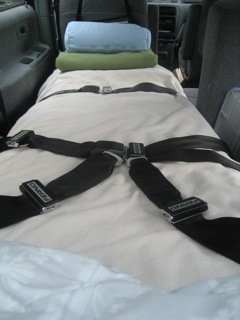 Circumstances now lead us to contemplate moving my daughter from Minnesota to Philadelphia. This is a much more complicated process and there is very little information to guide us, to help us to make decisions. One has to be extremely careful with a severely ill ME patient. Movement, sounds, smells, sights, vibration, touch can all be destructive for the patient – and not just in an incidental manner. I will write more about this later.

Posted by consuegra at 3:44 AM