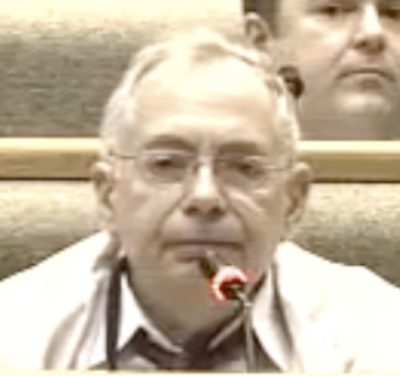 Yesterday's question and answer session was a grinding bore. The tone was set by an incredibly irritating moderator from the UK. Who was this guy? Where do they find these people? He was like a bad English actor, a bit drunk, a bit incoherent. The session quickly evolved into a series of incredibly stupid questions. Each questioner, deeply ignorant of the subject, felt the need to say whatever came into their heads. And then there was the obligatory researcher griping by a woman who needed to have the door closed on her publicly. These guys and gals have no shame. They have no ability to restrain themselves, and this inability allows the situation to fall apart very quickly. Towards the end, an oncologist from Buffalo, pictured above, asked the only good question of the day. His question got some of the members of the panel to focus on what is at hand. This fellow's name is Dr. Michael Snyderman. Hire this guy - he is great.

Hopefully there were other people at this conference like Dr. Snyderman - men and women who can identify the problem and focus their minds on it. Make no mistake, in spite of the circus idiocy of this conference, the WPI is building allies, accumulating collaborators. It is obviously slow going, but it is happening. The WPI is holding all the cards. They just need to keep doing what they are doing, picking up the smart folks and forgetting about the rest. Seeing Dr. Snyderman in this sea of crap gave me hope - and no, the Patient Advocate had no idea about him previously.
(On September 28th Jamie Deckoff-Jones published a very important post on Dr. Snyderman's poster paper at the XMRV conference. Later the same week Mindy Kitei wrote a post on Dr. Snyderman and promised more to come in the form of a longer interview. These are two of the key bloggers on XMRV or MLV-related viruses.)
Posted by consuegra at 10:27 AM 12 comments: