Since 1990, for unspecified reasons, I have been reading every day about diabetes. Over that time, I have followed diabetes research and treatment closely. I have learned a great deal about the illness, but I know very little about the actual science of the research.

Since about 2002 I have been reading extensively about ME/CFS and other immune dysfunction illnesses. Again, I have no scientific knowledge upon which to draw.

While I have no scientific or medical background, I believe that it is possible to gain a "feel" for these illnesses- diabetes and ME/CFS -  in spite of being scientifically ignorant. In both situations I have no built-in prejudices and have no vested economic or career interest in either field that might interfere with my judgements. In other words, I have no connection to the "Industry" of these illnesses. Most importantly I have always tried to connect to gifted people who can flesh out my own "insufficiencies".

Years ago I was privileged to meet Al Mann, the founder of Minimed. With his small, flexible and innovative company, Minimed, Al Mann greatly improved the maintenance possibilities of diabetic patients. Al Mann was an amazing man who cared deeply about patients - and it was a sad day when Minimed was sucked up by the large Minnesota company, Medtronic.

Early on, in learning about diabetes. I stumbled upon the work of Dr. Richard Bernstein. At the time Dr. Bernstein and his ideas about diet and diabetes were highly discredited by mainstream endocrinologists. Since that time, Dr. Bernstein's ideas have gained great currency. His book can be purchased here. There are intimations of Dr. Bernstein's ideas in Dr. Joseph Burrascano's imploring Lyme patients to ditch the carbs.

Diabetes, at the moment, is a maintenance illness. With slightly more information, perhaps ME/CFS can reach this status? More needs to be known about the etiology of ME/CFS.

In this post I am unable to list all the diabetes researchers that I admire and follow. Instead I would like to focus on one of them: Dr. Denise Faustman of Massachusetts General Hospital. I have written a previous blog post on Dr. Faustman here.

Dr. Faustman is back in the news this week with a very small, early stage paper publication in PLoS ONE.  The proposed treatment, a relatively safe tuberculosis vaccine in use for eighty years, is apt to yield no profits for the pharmaceutical industry.

The hope is that this vaccine can shut down the autoimmune reaction in type 1 diabetes (and perhaps other autoimmune illnesses). Perhaps ME/CFS researchers Mella, Fluge, Peterson, and Kolgenik are reading about Dr. Faustman's work? I certainly hope so.

Several articles on Dr. Faustman's paper can be found here and here.

From the Bloomberg article:

"Faustman and her colleagues at Massachusetts General in Boston are working to get the vaccine to market. After their early findings in studies with mice, she said they tried to interest every major drug maker in developing the vaccine as a possible cure for diabetes. All told her there wasn't enough money to be made in a cure that used an inexpensive, generically available vaccine, Faustman said."

This publication is very exciting news for those interested in a solution for type 1 diabetes. However major questions rear their ugly heads. Why is there so much resistance to this research? Why is Dr. Faustman so isolated with this research after so many years? Who is going to finance further research? In the big picture, these questions are disturbing - and yet they are so familiar, familiar also to those who know the history of research into ME/CFS.

Dr. Faustman outlines her research and answers some pressing questions in several youtube videos, the first from 2012, the second from the year before.


Dr. Faustman is a very impressive researcher. She does not look like she is going to be dislodged from pursuing her interests. She gives me hope that there are other individuals out there looking for unique solutions to complicated medical questions - and specifically that there will be some spill-over into ME/CFS/lyme diseases.


In the course of my job as patient advocate for my daughter, I travel to various places - CA, London, New York City, Ottawa, Brussels. Most of the time I am mired down in patient advocate work, which is only partially rewarding. One positive reality is that I do get to meet many extraordinary people - and this could certainly be the subject of another and longer post. In these travels there are moments of relief -  ducking into the National Gallery to view my favorite painting (Titian's The Death of Acteon), a hot dog with mustard and sauerkraut on the corner of 69th and Lexington on a sweltering day, checking out the Gauguin painting at the Indianapolis Museum of Art, or going to an Orchestra concert in Minneapolis.


Throughout the mid-West there are these extraordinary museums reflecting broad and deep collecting interests of past inhabitants of these towns - Minneapolis, Detroit, Cleveland, Cincinnati, and St. Louis.

This summer I had the privilege of visiting with Dr. Dale Guyer at his Institute of Molecular Medicine in Indianapolis. I really admire this clinician. I have learned fundamental approaches to ME/CFS from him. At the end of my time with him, I asked if I could have a picture taken with him. Dr. Guyer suggested that we go out into "The Garden" for the picture.

I stepped out back of his clinic and encountered an astonishing world.


In the approximately 1/2 acre behind his clinic, Dr. Guyer has planted a vast array of conifers and Japanese Maples. Dr. Guyer explained to me that the two plants directly behind us in the above photo were recently added and are of a species that is quite rare, yet can exist in the environment of Indianapolis. 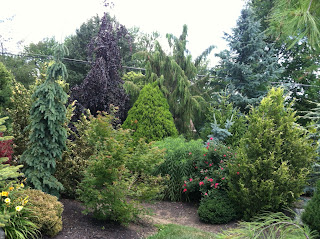 I can only assume that Dr. Guyer has made every single decision in regards to the plantings and combinations of this rare and beautiful garden. One can discern from the photos the care taken regarding color, variety, size and placement of each and every plant, stone and path. The reality is very powerful. Everything is calculated to deliver the greatest visual and emotional impact. Nothing is haphazard and the entirety has a sense of oneness, of great unity. It is like a gigantic three dimensional painting. 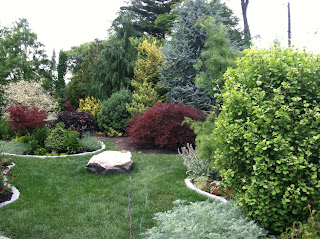 It occurs to me also that this garden is an extension of Dr. Guyer's skill and experience as a physician. Certainly the garden gives a clear insight into the complexity of his personality. His staff jokes that when he gets really refined in his medical practice, he will just send his patients out back to sit, resonate and heal in the environment. 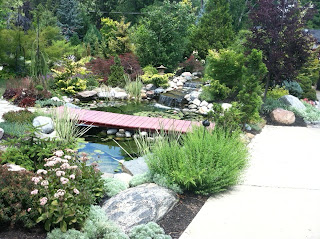 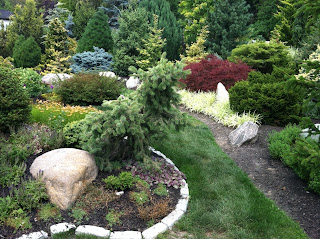 I spent some time walking around "The Garden" and took a few pictures. My only regret was that I did not stay longer, and I have thought about this space and its effect on me a great deal since then. It is very seldom that I am swept away by a spot and enter into a suspended space where I am lost or do not know where I am. This is the profound effect of this garden as you walk into its midst. Suddenly you are transported to - who knows where? It is another world, a world suspended from the raucous existence of modern life. 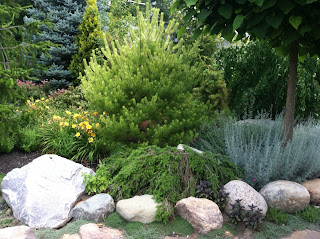 Dr. Guyer's garden reminded me of another favorite destination of mine, a place that I have not been for many years, but to which I yearn to return: Bok Gardens and Tower in Lake Wales, FL. Although Bok Tower is much different than Dr. Guyer's garden, it has the same powerful effect on the visitor. Much of the impact comes from not expecting it. Bok Garden takes you into a suspended world where you are suddenly and completely detached from yourself. I suppose many people, like me, return there for solace and removal from life's travails - and to reacquire a bit of peace or peace of mind.

I asked Dr. Guyer what he does in his Garden? He says that he sits there in the evening with a glass of wine.

It is not possible this morning to leave this appreciation of Dr. Dale Guyer and his garden without mentioning a recent article that appeared this morning. The article is found here and concerns gut ecology. Both Dr. Guyer and Dr. Kenny De Meirleir  have emphasized the need to heal the gut. It is a central issue in ME/CFS to both of them. Recent research into the gut environment begins to confirm what a number of ME/CFS physicians and researchers believe - that gut ecology might very well be at the center of this illness. If one wonders - as I do - why MAF 314 brings improvement to the patients who have access to it, this article suggests an answer.