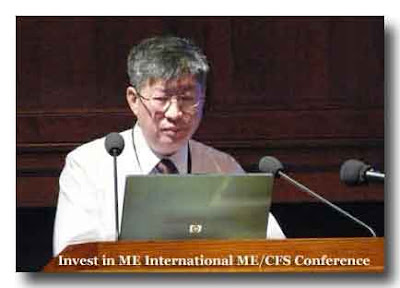 The Patient Advocate wants to write about Dr. John Chia. Dr. Chia is an infectious disease specialist who worked on EBV for many years. He got involved in CFS/ME by happenstance. His son Andrew came down with an unknown illness just as Dr. Chia was becoming interested in enteroviruses. Dr. Chia connected the dots, solved his son's illness, and reforged a connection between CFS/ME and enteroviruses.

The Patient Advocate first saw Dr. Chia in Fort Lauderdale in 2007. Subsequently the PA has seen Dr. Chia give lectures at the Invest in ME conferences in London in May of 2008 and 2009 and also in Baltimore at the HHV6 conference in June 2008. The first two lectures can be purchased on DVDs from the Invest in ME group and the Baltimore lecture in on the internet here.

Dr. Chia will give another presentation in London in May 2010.

Dr. Chia believes that enteroviruses are involved in CFS/ME. He takes stomach biopsies from his patients and controls and stains them to identify enteroviruses. These viruses included Coxsackie B (1-6) and 32 different Echoviruses. Dr. Chia finds enteroviral involvement in 82% of his CFS patients and 20% of his controls. The study can be read here.

Dr Chia does not claim originality in this study. Instead he builds on a forgoteen but establish legacy of research in the UK, particularly of John Richardson (d.2003.) Coxsackie and other enterovirus were on the front lines of CFS/ME research until they faded from the picture for a variety of reasons. Such are the ways of science, especially in CFS/ME research. Dr. Chia, with his research, has brought enterovirus back into to picture.

Dr. Chia ultimately identified enteroviral presence through stomach biopsies, which proved that these viruses continue to live in the gut ecology. This flies into the face of the idea that enteroviruses are hit and run viruses.

Dr. Chia discovered an antibody test for Coxsackie and Echoviruses that is more specific than other labs. By serendipity, a sample from Dr. Chia’s office ended up in ARUP lab in Salt Lake City - and the results came back quite positive. Upon investigation, Dr. Chia discovered that this ARUP lab does a test that is more specific than other labs. This ARUP test reports antibody levels of Coxsackie B 1-6 and 5 of the 32 Echoviruses. An elevation of 1:320 (1:32) is considered to be significant., especially for b4. The number of the ARUP tests are:

If a patient is unable to get a stomach biopsy, the key is to get an antibodies test at ARUP.

My patient did tests at Focus labs and ARUP at the same time. Here are the results:

Dr. Chia would consider the elevated Coxsackie b2 and b4 from the ARUP lab to be significant. The significance of this is heightened by the fact that the b4 is sustained at 1:640 in seven tests over a four year period.

Is there enteroviral involvement here and what is the treatment?

So far, Dr. Chia has been able to prove the existence of enteroviruses in the gut of his patients. This is a surprise to the CFS/ME community as most people had no clue about this. It took Dr. Chia’s individual thinking and persistence to look in this direction. Dr. Chia is aided in his research by his son and his wife. He introduces his lecture by saying that instead of going out to dinner, he, his wife and his son go to the lab. Dr. Chia speculates that if enteroviruses are in the gut, then they could be in the heart, the thyroid, the pancreas, and the brain. Proving the existence of enterovirus in tissue is a big deal - but it does not establish that it is the cause of the CFS/ME. Further research will perhaps elucidate the involvement.

In the meantime, Dr. Chia assumes that enteroviruses are a cause of CFS/ME in a large proportion of his cases. At the moment the treatments for enteroviruses are limited. Initially Dr .Chia gave a number of patients interferon, but he has stopped doing that because of toxicity problems and relapses after treatment. In the past few years, having stopped interferon treatments, Dr. Chia is using various Chinese medicines. He first used Matrine, which was literally difficult for patients to stomach. More recently he has been giving his patients Oxymatrine. Dr. Chia says that 53% of patients show betterment on Oxymatrine and a slightly higher percentage if they have Coxsackie B2 and B4. He recommends that Oxymatrine be started slowly and titrated up to a dosage level of 4-6 tablets a day. The patient can determine whether the Oxymatrine is effective with three months of treatment. The treatment is stopped if it does not bring betterment in this time period.

Dr. Chia imported the oxymatrine from China but worried about impurities. in the last few months he is making his own in the USA, a formula made conforming to FDA regulations and considered to be safe. There are some suspicious souls who feel that Dr. Chia has invented all this enteroviral CFS in order to sell his own supplements and this, of course, is a fantastic joke. Dr. Chia is one serious scientist and doctor, who strives mightily to bring clarity to a subsection of CFS/ME. It is anyone’s guess how large this subset really is. Cort Johnson’s linchpin site has more information on Oxymartrine here. The HHV6 Foundation has a patient forum with some discussion of Oxymatrine use.

The strangest aspect to this situation is that Dr. Chia makes uncertain headway in this world of CFS/ME. Somehow in this vague and confusing world of diagnosis and treatment of CFS/ME his ideas are a little to specific and scientifically proven. The world of CFS prefers to clamor towards unproven claims of the magic bullet – XMRV* for instance – putting aside serious research that stares at us right in the face. For instance, Dr. Chia applied for funding from a recognized CFS/ME organization to study the effect of Oxymatrine on CFS/ME patients, but was denied funding.

A noticeable exception to a general level of indifference towards Dr. Chia is his reception in the UK, where he has been invited to give lectures for three years running. It will be worthwhile keeping an eye on his research as Dr. Chia is really onto something and does not seem to want to be interrupted in his headlong effort to solve part of this illness. The unfortunate part of this situation is that with the clear indentfication of a potential cause of CFS/ME no funding is available to develop anti-enterovial drugs. Dr. Chia says it will be ten years before such drugs will be forthcoming. This is a long time to wait.

Dr.Chia is on the board of the Enterovirus Foundation which can be found here.

*This is not to say that XMRV research is not important. It obviously is tremendously important and bears following very closely. However since October 9th, the CFS/ME community has gone haywire over the possibilities of diagnosis and treatment for XMRV. It is ironic, in this environment, that doctors and researchers are not paying more attention to the longstanding enteroviral involvement with CFS/ME. It might be worthwhile to take a step backwards and look once again at the possibility that enterovirus are heavily involved in CFS/ME, with or without XMRV.
Posted by consuegra at 7:44 PM